The area around the eyes is particularly susceptible to age-related changes. By age 35, most people notice that the delicate skin above and below their eyes has started to sag. As the aging process continues, folds above the eyes and bags below the eyes become more pronounced. The eyelids themselves can also droop significantly, altering the shape of the eyes.

Though injectable treatments like Botox® and fillers can reduce the number of wrinkles around the eyes, they can’t treat all of the visible signs of eyelid aging. To correct eyelid sagging and eye bags, Dr. Wilson uses a surgical procedure called blepharoplasty.

What Are the Benefits of Blepharoplasty?

Eyelid surgery has obvious cosmetic benefits: It reduces wrinkles around the eyes, restores youthful eye contours, and eliminates puffiness under the eyes. Patients who have eyelid surgery look refreshed and alert after their procedure, rather than appearing fatigued. This can lead to more positive interactions, especially in situations where appearing engaged is important (e.g., in the workplace).

Blepharoplasty improves quality of life in other ways, too. Eyelid sagging (known as ptosis) frequently leads to ocular discomfort by making the eyes either chronically dry or watery. This in turn tends to increase problems with eye strain, especially when the affected individual is using a backlit device. Severely droopy eyes can even reduce a person’s peripheral vision, making driving much more difficult.

View More
I had a lower face and neck lift and upper and lower eyelid surgery with Dr Wilson one year ago. I could not be more pleased with my results. I have never looked better. This surgery has given me a new self confidence that I did not expect. I couldn’t be happier. Thank you Dr Wilson you are truly an artist.
P.P. 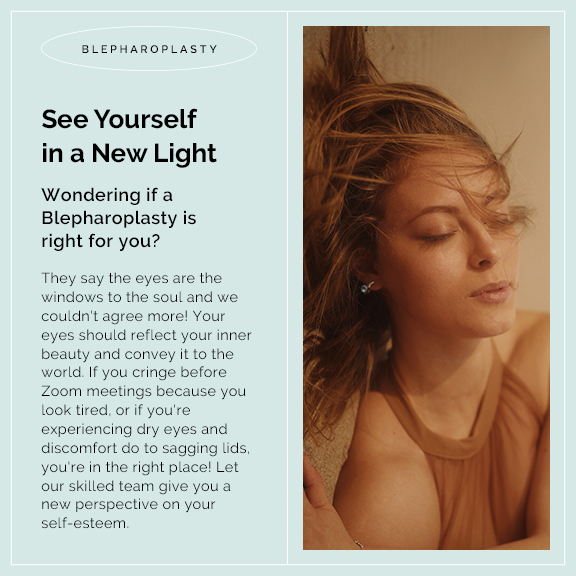 What Happens During Eyelid Surgery?

Blepharoplasty can be performed on the upper eyelid, the lower eyelid, or both eyelids. Though blepharoplasty is sometimes referred to as being an “eyelid lift,” the eyelids are not actually raised during this procedure. Instead, Dr. Wilson carefully removes excess skin and fat from the eyelids where necessary. Sometimes a small portion of the levator muscle in the eyelid is also removed, if the muscle has stretched due to aging.

During upper eyelid surgery, an incision is made along the exterior of the upper eyelid, permitting Dr. Wilson to remove tissue and contour the eyelid. Because this incision is hidden in the natural crease of the eyelid, it does not typically produce visible scarring. Note that upper eyelid surgery can also be used to create a crease in naturally hooded eyelids, even in younger patients who do not exhibit signs of ptosis. Some patients elect to do this because it makes applying cosmetics easier and creates a more defined contour to the eyelids.

Lower eyelid incisions, by contrast, can be made on the interior or the exterior of the eyelid, depending on the patient’s preferences and anatomy. Fat is then removed from the area under the eyes, eliminating the patient’s eye bags. In both forms of blepharoplasty, incisions are closed with sutures following the completion of surgery.

Though blepharoplasty is not a particularly invasive operation, it requires extreme precision. Only the most highly trained and experienced surgeons can create results that are completely symmetrical and natural looking. As one of New Hampshire’s leading experts on eyelid surgery, Harvard-educated plastic surgeon Dr. Anthony Wilson has the training and expertise required to restore both the form and the function of the eyelids.

At AW Plastic Surgery, we use a comprehensive multimodality approach to treatment in order to produce optimal results for every patient. Dr. Wilson can combine eyelid surgery with other procedures, like facelift surgery and facial fat grafting, to address multiple signs of aging simultaneously. Facial fat grafting can be particularly helpful for those who have hollows around their eyes, as well as loose skin. Alternately, dermal fillers can be used to fill in hollows.

To improve the condition of the skin around the eyes, Dr. Wilson may recommend IPL Photofacial therapy or chemical peel. These therapies can further reduce the appearance of fine lines and lighten dark pigmentation around the eyelids. When you come in for a consultation, Dr. Wilson will carefully assess your individual needs and create a personalized treatment plan to address them.

What to Expect During Recovery From Eyelid Surgery

Eyelid surgery, when it’s performed on its own (and not as part of a facelift), has a fairly brief recovery time. Most patients experience some bruising and swelling following their procedure, but after about 48 hours, these symptoms noticeably subside. Gently applying a cool compress to the eyelid area several times per day, for at least three days after surgery, will minimize bruising and swelling and improve patient comfort.

After having eyelid surgery, you will need to avoid engaging in any kind of heavy activity. Patients generally need to take between seven to ten days off work while their incisions heal. Your incisions will be covered with thin bandages for about three days; throughout the rest of the healing period, they will be closed with stitches. Dr. Wilson will provide you with pain medication and lubricating eye drops to improve your comfort (temporary eye dryness sometimes occurs after eyelid surgery). You will also be given detailed aftercare instructions prior to your procedure.

The upper eyelids and brow are closely associated. Patients often feel they have heavy lids but in fact have a heavy brow or a combination of heavy brow and lids. A brow lift addresses the heavy brow – lifting the brow and eyelid skin in unison. For total upper lid rejuvenation, a brow lift and blepharoplasty can be performed at the same time.

Dr. Wilson offers open coronal and pre-trichial browlifts. These procedures place incisions either in the hair or at the hairline. Small amounts of skin are then removed to provide an adequate lift. In certain patients only the lateral brow is lifted while other patients require a complete browlift. Patients can expect one to two weeks of downtime from these procedures. The choice of which type of brow lift depends on the natural hairline and brow height of the patient. This will be determined during your consultation.

Who Makes a Good Candidate for Eyelid Surgery?

Blepharoplasty patients must be in good overall health and be current nonsmokers. Because droopy eyelids can be caused by certain medical conditions, it’s important to visit your doctor if your eyelids droop prematurely, suddenly, or unevenly. Medications can also play a role in worsening eyelid ptosis. When you visit Dr. Wilson for a consultation, he will review your medical history in order to rule out the presence of an underlying condition and ensure that you’re a good candidate for this procedure.

From Breast Augmentation to Non-Surgical Rhinoplasty and everything in-between, Board-Certified plastic surgeon Anthony Wilson, MD, FACS offers a wide range of procedures at his Portsmouth, NH office. If you are interested in booking a procedure, take the next step by scheduling a consultation today.

Arrange a Blepharoplasty Consultation in Portsmouth

If your eyelids have been impacted by the aging process, eyelid surgery can help you restore your confidence. Contact our New Hampshire plastic surgery practice at (603) 294-4526 to arrange a personal consultation with Dr. Wilson. We look forward to meeting you and helping you rejuvenate both your appearance and your confidence.

Anthony Wilson, MD, FACS has vast experience performing facial, body, and reconstructive procedures. After receiving an undergraduate degree from Harvard University and completing training with a medical degree from the University of Pennsylvania, Dr. Wilson has continued to improve his technique to ensure the best results possible. Learn More about Anthony Wilson, MD, FACS and why you should choose the Board-Certified plastic surgeon for your next procedure in the Seacoast Region.